These buns are not full brioche buns but the milk, butter and egg makes them soft and chewy.  Eat them warm with lashing of butter or maybe make a double batch and freeze for later. 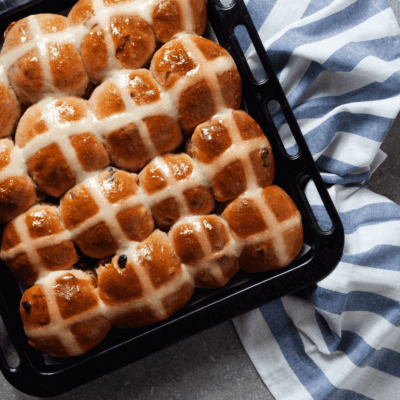 – Place the milk in a pan and bring to just below boiling point.  Take the pan off the heat and add the butter, so that it melts.  Once the butter has melted, add the water.  Leave to cool until it is tepid, then stir in the egg and orange zest.

– While the milk is cooling, place the flour, yeast, salt, sugar, spices and dried fruit in a bowl.  Make a well in the centre and pour in the tepid milk mixture.  Stir together to form a dough.

– Knead the dough until smooth and springy:

(2) you can knead in a food processor/table top mixer for 5 minutes; or

(3) try the folded method:  tip the dough into an oiled bowl (use a non tasting oil such as vegetable oil).   Fold the edge of the dough into the centre, turn the bowl a quarter turn, fold the edge in again.  Do a total of 8 folds – this should take you no more than a minute or so. Leave the dough to rest for 10 minutes.  Repeat the folding process 3 more times.

– Place the dough in a lightly oiled bowl (use a non tasting oil such as vegetable oil), cover and leave to rise for 1 hour or until doubled in size.

– When the dough has risen, turn it out onto the work surface and divide the dough into 12. Roll each piece into a ball and place on a floured baking sheet, leaving a few centimetres between each one.  Cover with clingfilm and leave to prove for around 45mins -1 hour until 1 ½ times the size.

– Preheat the oven to 200*c.  Mix 2 tbsp plain flour with enough water to make a paste, then place in a piping bag (use a freezer bag if you don’t have a piping bag and snip the corner off). In a separate bowl, mix an egg yolk with 1 tbsp milk.  Brush the buns with an egg glaze and top with a piped cross.  Bake in the oven for around 20-25 minutes until the buns are well risen and golden and sound hollow when tapped on the base.

– Place 1 tbsp caster sugar in a pan with 1 tbsp water and melt over a low heat. When the buns come out of the oven, brush them with the glaze then cool on a rack. 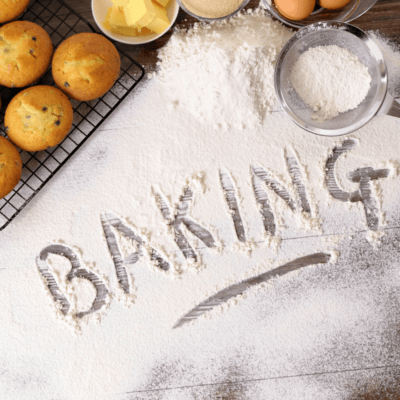 This type of dough is called an enriched dough.  Additions such as wholemeal flour, eggs, butter, milk, sugar, honey and beer will make the dough lovely and soft and delicious but they will make it take longer to rise as they inhibit the yeast so don’t worry if your dough is slow to rise – give it time

Glazes add texture to the top of a bread. In this recipe we use a sugar and water glaze but other glazes are milk, egg white, whole egg or even just a sprinkle of flour

Get the Latest Recipes! Join our newsletter.